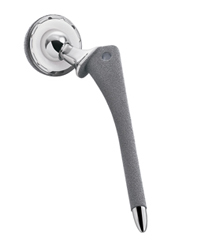 Our Houston DePuy Hip implant attorneys are here to help you. Depuy systems have been linked to side effects so painful that they have necessitated the need to repair or replace a partial or an entire DePuy hip replacement system. Symptoms of a defective DePuy hip implant include swelling in the hip and/or accompanying hip, leg or groin pain, any or all of which may lead to difficulty walking.

In August 2010, DePuy Orthopaedics, a division of Johnson & Johnson, recalled two hip replacement systems: the ASR XL Acetabular System and the ASR Hip Resurfacing System. The first, an all-metal hip replacement system, has been found to be wearing out well before its time, causing tiny metal shavings to dislodge and damage nearby tissue, as well as potentially poisoning the unlucky hip device implantee with toxic metals. The main problem with the latter device seems to be its failure to properly fuse as advertised.

In February 2011, the Food and Drug Administration (FDA) warned that DePuy metal on metal hip implants may need immediate repair or early replacement. The metal in these implants can wear away and damage nearby tissue, the FDA found. Symptoms of the problem can include pain in the leg, hip or groin, swelling in the hip, and noticeable changes in the person’s gait.

History of the Depuy Hip Implant

The human hip consists of two basic parts, a ball and a rounded socket, one or both of which can wear out over time, or even become dramatically injured via violent action (as with former football player Bo Jackson) to the point of needing surgery for repair or replacement.

DePuy Orthopaedics, Inc., a division of Johnson & Johnson, is a company which manufactures parts meant to repair or partially replace portions of the ball and the rounded socket. Many of the company’s products appear at this date to have excellent track records, while others, such as the two recently recalled, appear to eventually cause at least as many problems as they temporarily solve upon first being implanted.

While many DePuy Hip implants can be helpful for people with severe hip problems, at least two of DePuy’s products have caused people severe problems.

You may qualify for compensation if you or a loved one has experienced serious side effects from a DePuy Hip Replacement System or partial implant. Compensation is to help with the cost of your medical expenses as well as your pain and suffering.