One person has died after an SUV slammed into a restaurant in southeast Houston.

According to Houston police, the crash happened in the 5900 block of Martin Luther King at around 11:40 a.m. Wednesday. Signs bearing the location identify it as Medi Grill.

An SUV hit the building and kept going all the way through, coming to a stop at the opposite wall.

Surveillance video captured the SUV barreling through the restaurant. It took out a wall and everything in its path. Employees arrived just 30 minutes earlier.

“We got lucky because there was nobody in there,” said Ahmed Rajhed of Medi Grill, who added at least six people would have normally been inside.

“I thank God there are no other injuries. None of my family members were there,” he said.

According to police, the 55-year-old driver was killed. No one else was hurt.

Police say the driver had a minor crash just down the road prior to slamming into the building. A witness named Dominique saw the aftermath and checked on the driver.

“He stopped there for a minute,” said Dominque, recalling a chemical smell on the man.

“While we was walking off, he opened his car door and he was hitting it (the car), so that’s how I know he was really messed up,” she said.

Toxicology results will show if he was under the influence. 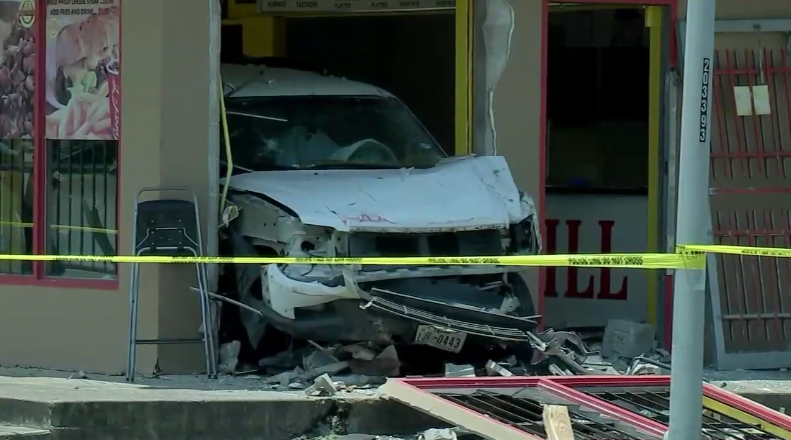