Man Dies After Being Hit by SUV in Houston

A man in Southwest Houston died after he was struck by an SUV. The man was struck by a Mitsubishi Montero while crossing an intersection but reports suggest it is unclear if the person hit by car was in the crosswalk or not.

The driver of the vehicle stopped to talk with police about the incident after the car accident. The driver was not under the influence of drugs or alcohol and no charges have been filed in the case.

Read the full story below. 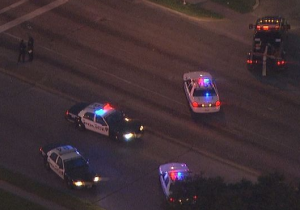 HOUSTON – A man died after he was struck by an SUV in southwest Houston, police said Monday.

The incident was reported on W. Bellfort at Larkwood around 5:15 a.m.

The pedestrian was crossing W. Bellfort when he was struck by a Mitsubishi Montero, according to the Houston Police Department. Views from Air 11 showed that the pedestrian died at the scene.

The SUV driver stopped to talk with police. He said he had a green light at the time of the incident.

It was unclear if the pedestrian was in a crosswalk or not, but police said no charges have been filed in the case. Alcohol was not factor in the incident.